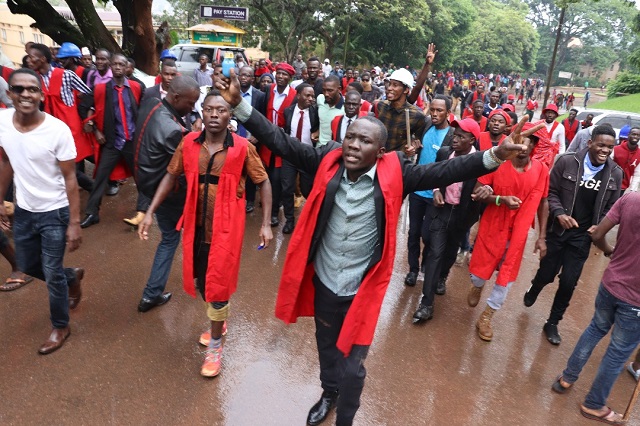 It is not uncommon these days to see a group of students striking for one reason or another. According to Uganda’s status quo, strikes, no matter how peaceful, are always considered acts of violence, and the police often use tear gas or rubber bullets to quell them whenever they strike.

As such, lots of parents don’t want their children to be part of these strikes, no matter how necessary they might seem. However, let’s take a look at the reasons for these university strikes;

This is common in public universities like Makerere where abrupt hiking of tuition fees is unwelcome, and usually calls for protests.

By striking, students believe that they can compel the administrators to;

At every university, there are always a few things that students are dissatisfied about, and really want the administration to change. Some of them include;

In all cases, this is usually in comparison with the amount of tuition that students pay to access the school services.

The politics at universities are also a bit as complex as the national politics. Political reasons can be traced deep inside every demonstration at the university, even if the headlining story is a bit different. Here are a few political arguments;

Political reasons are the most dangerous causes of strikes, as they usually cause violence.

While a university might build an impeccable system that allows and provides a smooth environment for all students, there are always a few loopholes along the way, that sometimes affect students. Therefore, It is usually through strikes that their issues are known. Examples include;

Although this is a more genuine and decent cause, it can still result in violence which can later adversely affect the students.

Striking is addictive. In this case, the students that usually love to participate in strikes, are not there for the first time.

If a student happens to strike for a non-genuine cause, and they happen to walk away without a punishment, that is motivation enough for them to participate in more strikes.

Since most universities attract a  large number of students, it is highly likely that many students will be influenced to join strikes and other activities.

In fact, majority of the students that take part in the strikes, only do so because they’ve been influenced, and didn’t want to be left out.

7. Poor communication between the administrators and the students

When things get physical, it is usually because the verbal methods didn’t work well.  Poor communication manifests in forms such as;

Usually, strikes come in as a second alternative after the students have tried to air their concerns to the administration in vain.

Strikes these days seem to be a necessary evil, and students justify them in all possible logical ways, but this doesn’t make them any better.  Universities have to be able to provide solutions to these chaotic situations because some students lose their lives in the worst case scenarios.